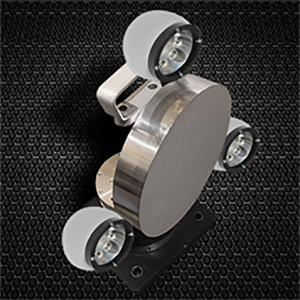 For a given instrument setting, the number of points on a target that is farther from the IUT is less than that for a target that is closer to the IUT. For a sphere target , this issue is exacerbated by the fact that the return intensity is not the same from all the locations on its surface. A return beam corresponding to lower return signal intensity may not register with the instrument , resulting in missing points from a sphere’s outer periphery (compared with data from the sphere‘s surface at the center). This reduces the coverage area of the scan data on a sphere at the farther location, compared with that at the nearer location (as illustrated in figure 9). This in turn increases the error when calculating the center of the sphere using a nonlinear least­ squares fitting algorithm.