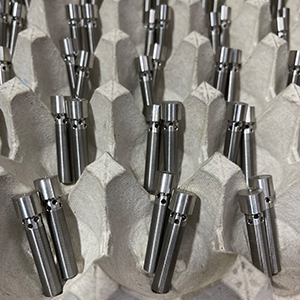 We supply custom screws that utilize only the finest materials and feature complete customization with variable options for thread size, screw material, ball end material, size, and even include custom locking features in any quantity requested. 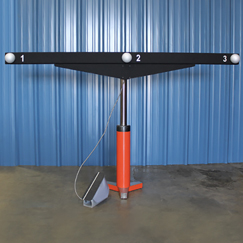 The Condor Scale Bar was designed specifically to make performing the ASTM E3125-17 simple. The ASTM Standard Test Method for Evaluating the Point-to-Point Distance Measurement Performance of Spherical Coordinate 3D Imaging Systems in the Medium Range, was released in December of 2017. Bal-tec was the supplier of Integration Spheres for the development of the standard. Shop Now

For a given instrument setting, the number of points on a target that is farther from the IUT is less than that for a target that is closer to the IUT. For a sphere target , this issue is exacerbated by the fact that the return intensity is not the same from all the locations on its surface. A return beam corresponding to lower return signal intensity may not register with the instrument , resulting in missing points from a sphere’s outer periphery  (compared  with data from  the sphere‘s surface at the center). This reduces the coverage area of the scan data on a sphere at the farther location, compared with that at the nearer location (as illustrated in figure 9). This in turn increases the error when calculating the center of the sphere using a nonlinear least­ squares fitting algorithm. Shop Now 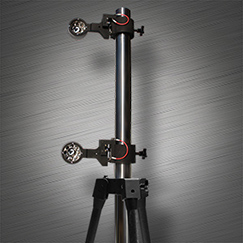 Relative Range Tests – A relative range test is performed by placing the target at two positions (a near position and a far position), measuring the target at both positions with the IUT and the RI, and calculating the relative range error. If LruT and LRr are the distances between the targets as measured by the IUT and RI, respectively, then the relative range error (ERR) is given by: ERR = LruT – LR!. The RI in all the tests performed at NIST is a laser tracker, and the IUT is a laser scanner; however, the choice of instrument for RI is left to the user. 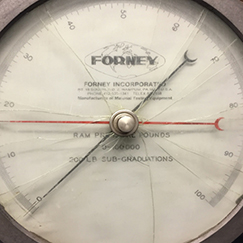 Funded by Facility for Rare Isotope Beams – Michigan State University. Load testing was performed with the Monster Canoe Sphere (part # MCS-5000) and 2 Large Split V (part # SP-VB-45 LG ) components. Parts were subjected to 10,000 lbf, 15,000 lbf and 20,000 lbf. The contacting surfaces at the interface between parts, were inspected each test. The load was applied to the components using a Forney compression testing machine, capable of applying a 100,000 pound Load. 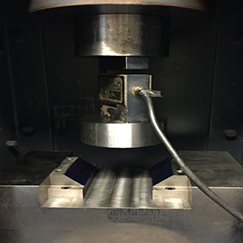 First of all verification of the accuracy of the pressure meter was essential. The Forney compression testing machine, uses a hydraulic pump to move a large diameter cylinder. It measures the force using an analog pressure gage. An “S” type digital load cell transducer, was mounted to the ram of the hydraulic cylinder. A load of 10,000 pounds was applied to the transducer, the analog pressure gage was checked and found to be within 2%. It was decided this was accurate enough for this application. 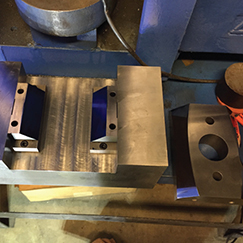 Bal-Tec made several pieces of tooling to facilitate the test’s. We first needed a robust mount for the Split V’s, for sufficient support we used a 4 inch thick block of chrome molly steel. A slot to accommodate the V components was machined into the block, the components were bolted and pinned into place. Adapters were made to mount a load cell to the ram of the Forney machine and an adapter to locate the canoe sphere to the bottom of the load cell. The load cell is rated at a maximum of 10,000 pounds force, so for the higher loads we replaced the cell with a solid stainless steel block.